Whether it’s for a family skirmish around the house and garden or an all-out office war, the one wielding the best Nerf gun is the winner. But which one should you buy?

NERF, owned by Hasbro, have produced many, many different shooters, including the ever popular Blaster and the Zombie Strike, and a multitude of ammunition types. The name Nerf is now commonly used to describe any foam ammo firing gun.

Nerf guns vary in price, size, power, capacity and ammo type. You don’t want to be firing rainbow pony shaped ammunition at your highly irritating and competitive colleagues, but by the same token, it’s best to avoid your young daughter attempting to blow up her brother.

The range of accessories is expanding all the time, with some, such as sights, being mainly cosmetic. They look cool, but won’t really help in close-quarters Nerfing. You can also get grips, barrel extensions, bipods and more, but probably the most useful are high capacity magazines or ‘clips’.

TGN headquarters is now a war zone, with some pretty serious Nerf testing going on, all in the name of research, obviously.

Designed for quick draws, this is a well made rapid firing blaster. With improved accuracy, and flight stability, the Elite Blaster can fire up to 75 feet, and comes with 10 darts.

Lightweight and easy to handle, this is an awesome gun for older children upwards. The rotating barrel works extremely well, and gives you adjustable rapid-fire ability, easily taking out opponents. Reloading is super quick, and the 75 ft firing distance is no exaggeration!

Only 6 darts are included, can we have more next time, please Hasbro?

If you’re looking for a Nerf that is tough, reliable, and has the rapid firing and loading required for serious warfare, this is it! 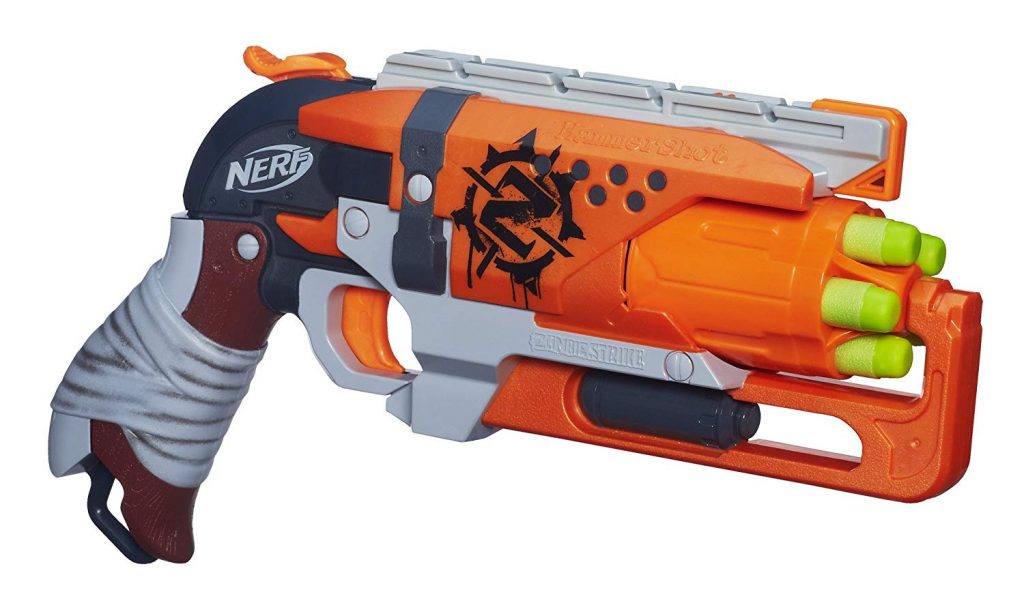 The 5-dart Zombie Blaster is a mean looking Nerf gun. Feeling solid and well balanced, this offers awesome one handed rapid blasting, and comes with 5 Zombie Strike darts, plus stencils and detailed instructions.

Obviously anything with ‘zombie’ in the name is supercool, and this Nerf gun is definitely that. The Hammershot blasting is an excellent feature, which we used to great effect, and still have a couple of wimpy bruises.

Aesthetically, the fake zombie bandage around the grip isn’t good. However, should it be called ‘fake’ as that suggests that zombies, and real zombie bandages, actually exist … hmmm.

If your wish is to kill, or at least cause more wounds, to zombies, this should be your weapon of choice. 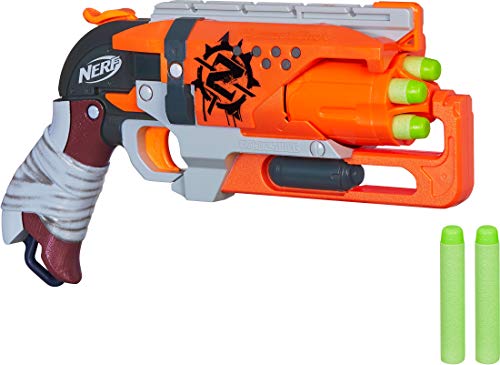 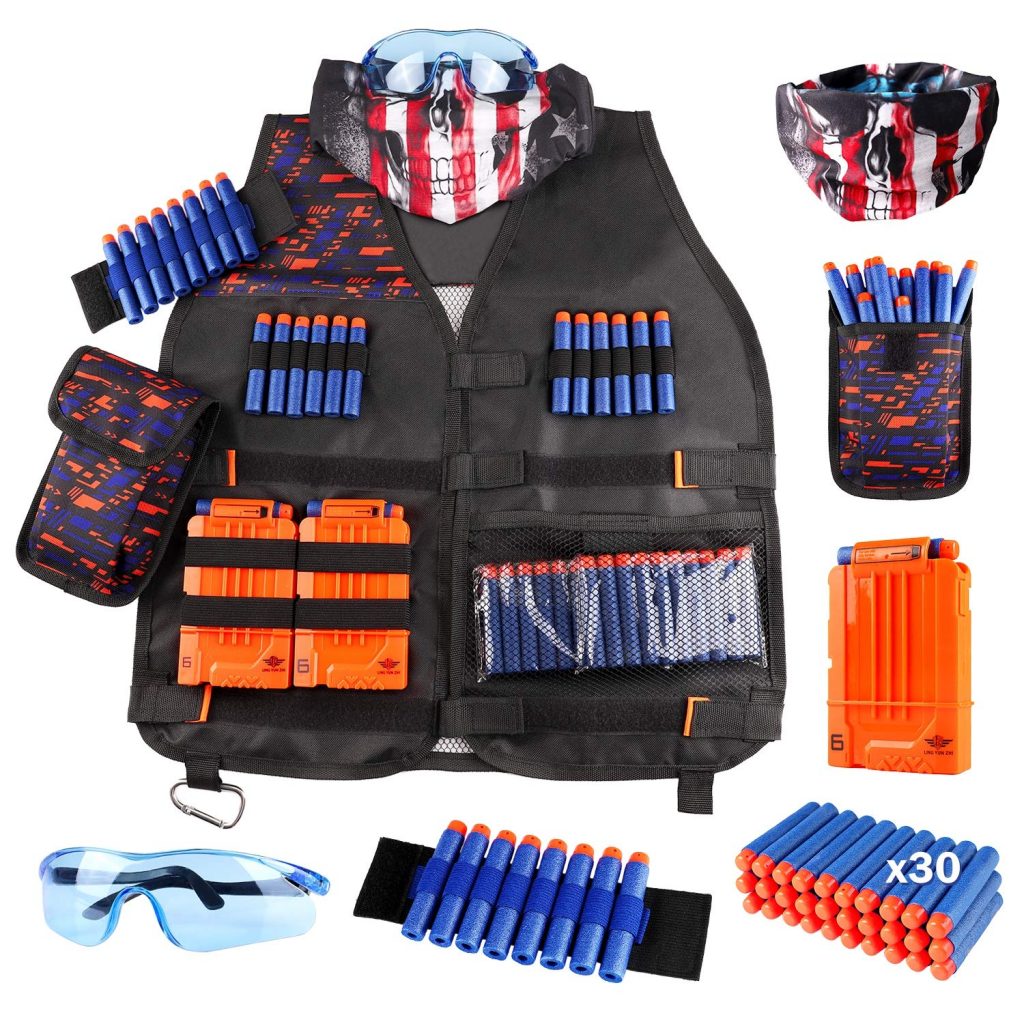 This kit, designed by Uwantme, contains everything your kids need for some mega Nerf fun. The vest is well made with large gun-sized pockets, loads of refill darts, goggles, a tactical mask, and lots of other goodies.

This is an awesome kit, making the whole Nerf experience that much better. It’s worth getting this just for the 30 extra darts – save yourself scrabbling around on the ground for refills.

It’s for kids! We did try and fit into it, so there needs to be an adult version – now!

This well packed kit is a must for any Nerf mad kid! 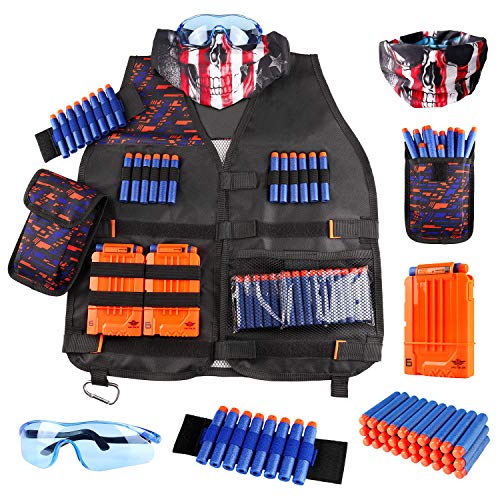 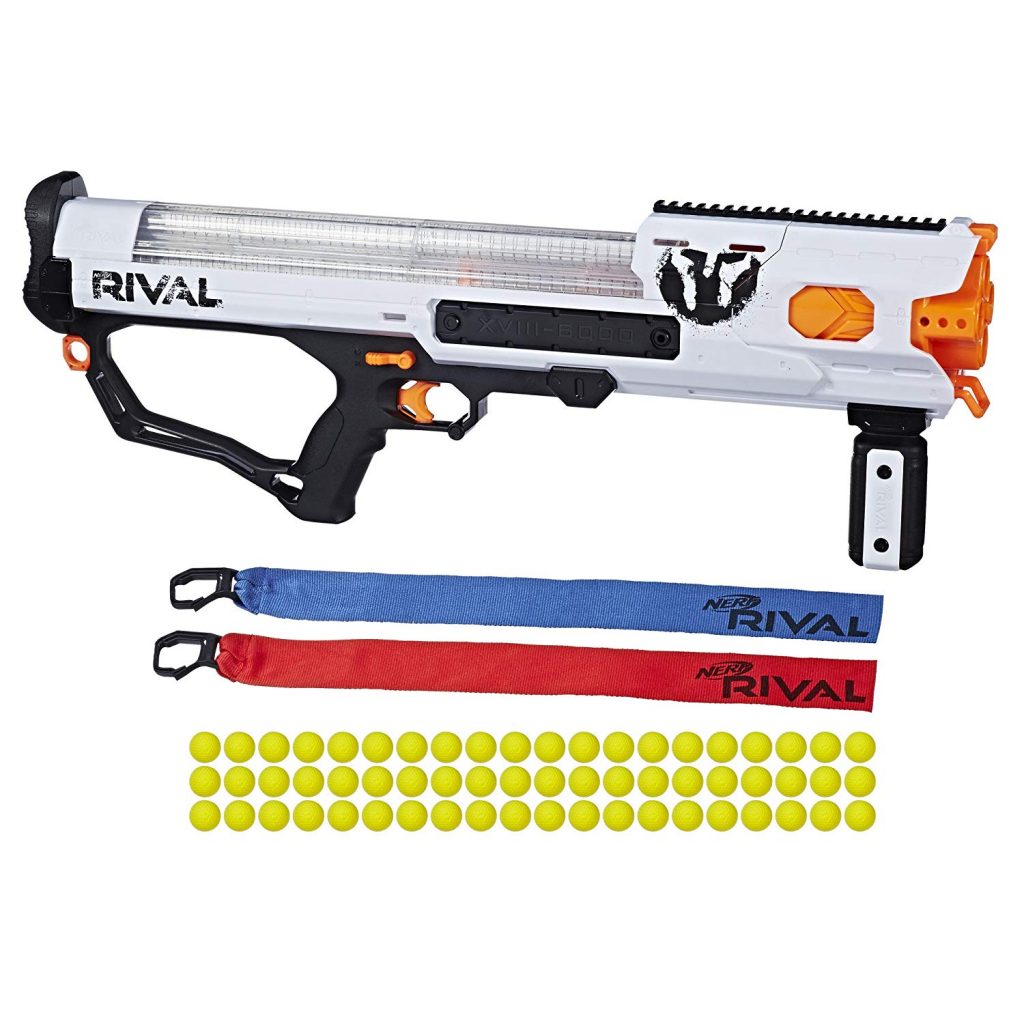 This high capacity blaster fires at an impressive 100 ft per second, and comes with 60 ammo rounds. For ages 14 and up, the Rival is a designed for fast action, and is built to last.

What can we say about this Nerf, other than this is a hard core weapon for hard fought battles and we love it! It handles heavy duty blasting easily, small enough to hide behind your back, and quick enough to take everyone by surprise!

The shoulder stock can take a bit of getting used to.

If you have colleagues that annoy you, a boss that runs you ragged, or school mates round for the weekend, this is an awesome Nerf blaster! 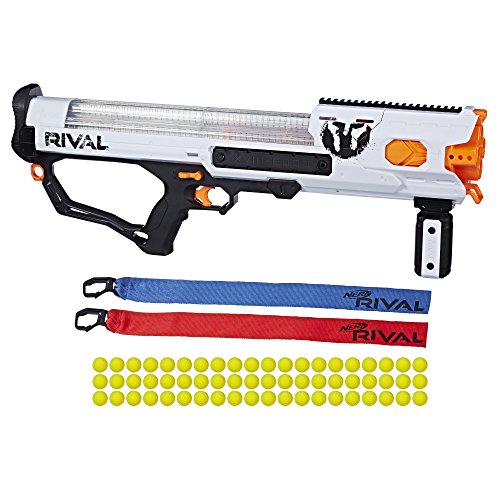 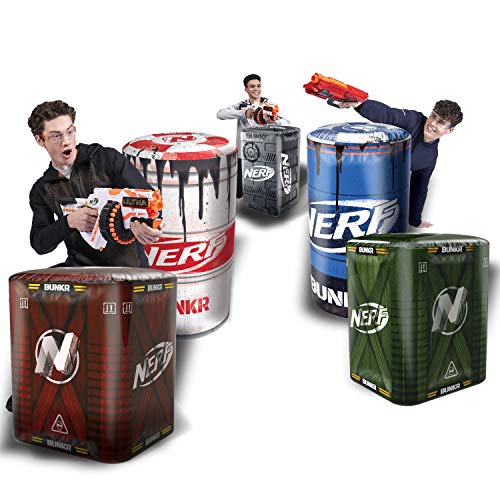 This two-piece set from Bunkr completes your Nerf experience. Although not from Nerf itself, it’s designed to be used with their products. The inflatables are ammo-proof and durable, can be thrown around, and used as cover.

Easily inflated, Bunkr’s set coped with us climbing all over them in the midst of a battle frenzy – honestly, the whole thing is a blur and we still won’t talk about it! But this is a great addition to your game.

On a really windy day, an inflatable crate could fly away unless it’s weighed down first.

These are the perfect cover for your Nerf battlefield - hard wearing, ammo-resistant, and at a budget friendly price. 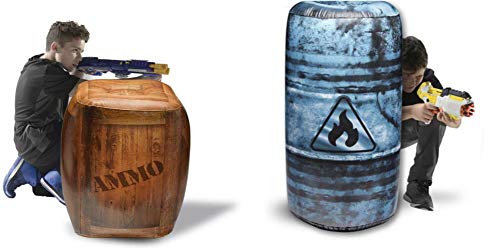 How do nerf guns work?

Nerf guns work by pumping air into a pressure chamber. Once the trigger is pulled the pressurized air propels the nerf pellet (hopefully!) to your target.

How do you aim with a nerf gun?

Over the course of its flight, a nerf pellet will drop slightly so always aim just above the target.

When were nerf guns invented?

The first nerf guns were created in 1989.

Take a peek at our other trending articles:

Welcome To The New Age Of Home Security